Do Vegans Eat Mushrooms? A Sustainable Alternative To Meat 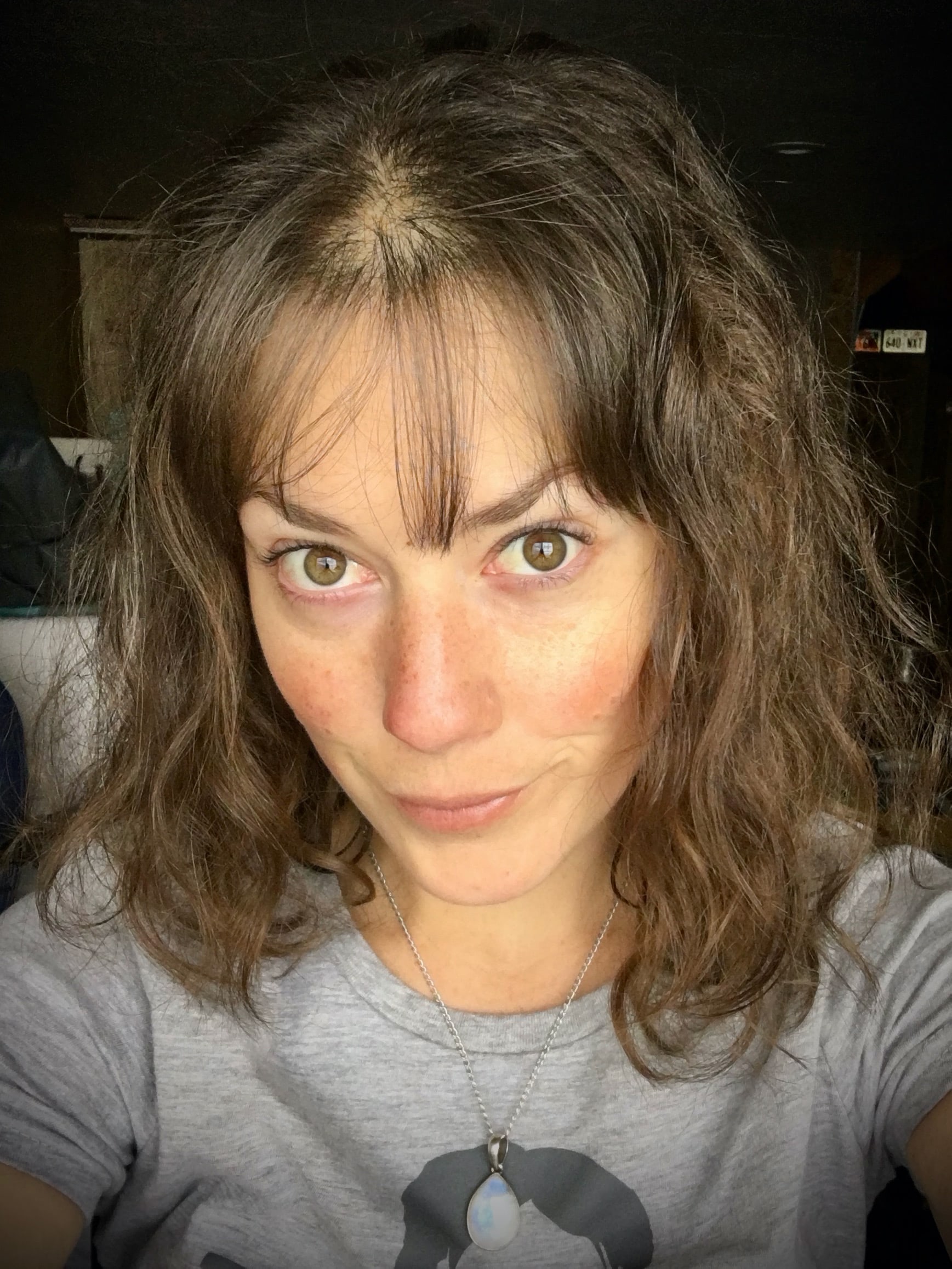 All too often, mushrooms get casually tossed in with vegetables as a food group. Still, they most definitely are not a vegetable. They miss the characteristics of the primary food groups to qualify any of them. So what’s the deal, are mushrooms vegan friendly as a sustainable meat alternative or not?

Do Vegans Eat Mushrooms As Part Of A Plant-Based Diet?

The main concern is that mushrooms contain chitin, which has been found in shellfish but not found in the plant kingdom. These common qualities make the more skeptical vegan question these fungi.

One of the reasons mushrooms are difficult to distinguish from being either plant or animal is the fact that they don’t photosynthesize. While this is a prominently lacking feature, they do still absorb their water and nutrients directly from the soil to survive, which animals cannot. 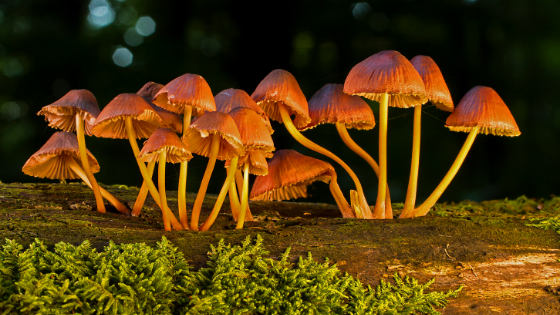 Another red flag for herbivore is how they are also a vitamin D source, usually only found in animal meat and by-products. Their vitamin D content also increases with sun exposure, another feature that is not possible to recreate by our vegetable counterparts.

Mushrooms not only help the earth immensely while taking very little in return, but they're also a cruelty-free option lightening the burden off our animal friends. The champignons have no central nervous system to sense pain from and are substantial in nutrients, making them the perfect candidate for meatless meals and more!

What Are The Health Benefits of Mushrooms?

These superfoods are not only our only natural not meat alternative to Vitamin D. They also provide us with up to 20% of the daily recommended value sources of niacin, selenium, riboflavin, and copper. They also contain potassium, fiber, vitamins B & C, calcium, and antioxidants.

The nutritional value varies with species, but all of them pack a punch of nutrients! Mushrooms also have a protective quality on our brains and blood vessels and act as an anti-inflammatory on the body.

When looking into the medicinal benefits of mushrooms, their field of advantages expands exponentially. Although not medically proven in the northwestern hemisphere, various cultures in the east have used them for ages.

What Are The Healing Properties Of Mushrooms?

These magical spores have caught wind, and news has traveled over about their numerous healing properties. Now over 100 species are being studied to gain the evidence to support these ancient methods.

Some of the most renowned healing qualities of the chaga and other mushroom species include:

Their uses range from dietary to medicinal and come in many stunning forms and textures. What you find in the grocery store is only a tiny fraction of what exists out in nature. The nutrients found in common edible mushrooms are also found in meats, grains, fruits, and vegetables, making them a valuable addition to the kitchen. 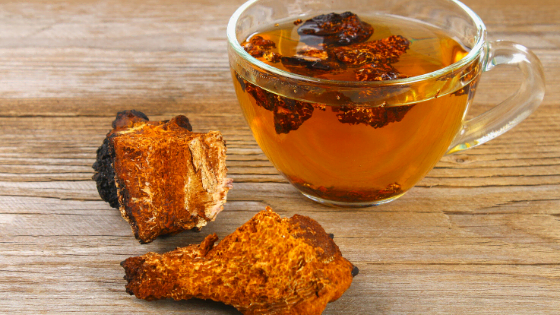 Beta-glucans are found in all mushroom species and are known to help fight inflammation and aid the immune system. They also contain lectins that can recognize and seize the growth of cancer cells. The powerful antioxidants provide neutralized free radicals while relaxing and rejuvenating the body and mind. The immune system itself also gets a boost and extra support.

Potent compounds in species like the Lion’s Mane can activate a potent peptide (a small protein) known as “nerve growth factor” or NGF and is essential for the neurons’ growth, maintenance, and survival within the brain.

They stimulate neurons to replenish the myelin sheath, a process known as remyelination, which helps keep them healthy and maintain their ability to conduct electrical signals efficiently.

One small supporting clinical study took place in Japan, where older men and women with mild cognitive impairment (MCI) took Lion’s Mane for 16 weeks. Throughout the study period, those who ate the lion’s mane showed significant cognitive function increases according to the scale created compared with the placebo group. Studies show that the advantages ceased if consumption of the mushrooms stopped as well.

Short-term and visual recognition memory appears to diminish over time due to chronic ailments. Both of these also appear to be supported by the peptides found in Lion’s Mane, which can help prevent the breakdown of crucial memory patterns and delay the onset of cognitive dysfunction. 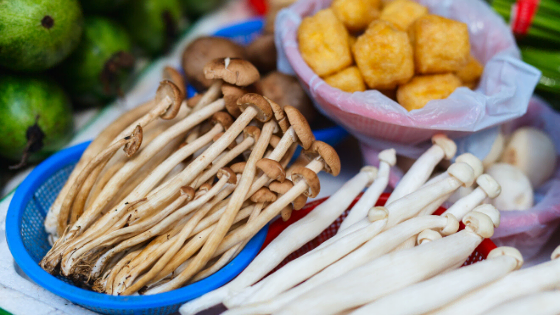 In Singapore, another study followed 663 individuals over the age of 60 who ate different amounts and types of mushrooms over five years.

They found that those who ate 1-2 servings (about three-quarters of a cup of cooked) a week profoundly reduced their risk for developing mild cognitive impairment (MCI). By adding one or more servings a week, the reduction in risk decreased over 50% in cognitive decline.

These studies do not prove cause and effect. Still, they do demonstrate the association between consuming mushrooms and reductions in memory loss. Food studies are challenging to control, making concrete evidence somewhat elusive in these studies.

We should remember to consider supporting factors as well, like the fact that many people who eat healthily are also more likely to participate in robust lifestyle measures, like regular exercise. These aspects also tie in a balanced mind and emotional state.

What Food Group Are Mushrooms In?

By not consisting of any roots, leaves, or seeds, and thriving without the need for chlorophyll or light to grow, mushrooms are a unique species all on their own. Even though they don’t quite have a typical plant’s characteristics, these truffles are still considered a plant-based food.

Mushrooms are classified as fungi in the food kingdom and so amazingly nutritious that they are also a superfood family member. Various societies have incorporated them for thousands of years, including the Greek, Chinese, and Egyptians. The healing properties among thousands of known fungi species are vast and run deep in these ancient cultures.

Mushrooms, being far from a fruit, happen to still act primarily as the fruit of a larger organism, mycelium.

In this sense, mushrooms are similar to plants, and the mycelium represents the ‘stems and roots.’ These fungal organisms can grow massively underground up to 1,500 acres, like the one recorded in Oregon and what may be the largest single living organism in the world. These larger systems intimately tie together through symbiotic relationships with the forests they inhabit. 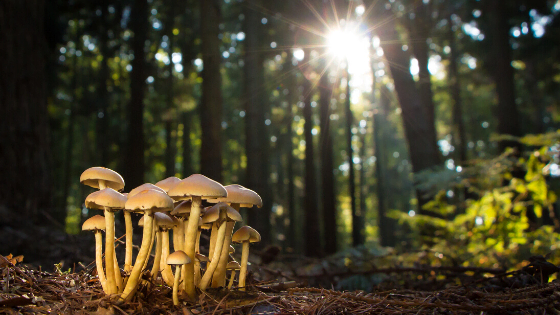 Without their existence, delicately balanced ecosystems would cease to evolve as fungi are responsible for the transmutation from death to rebirth among plants, animals, and the soil in nature. The process of recycling that occurs naturally in these systems would have no way to break down and further support larger life cycles.

Which Mushrooms Are Best To Use While Cooking?

Mushrooms are not only a healthy addition to the vegan, WFPB, or any diet really, but also a wonderfully considerate choice for the planet. These fungi grow in easily maintained environments, recycle nutrients, and revitalize the soil to support future plant growth.

There are many delicious ways to prepare and incorporate them into any meal throughout the day. A variety to choose from exist as well, like Beech and Enoki, all of which contain a different range of health and healing factors for the body.

Here are some commonly found choices at the grocery store to start with:

Some of the more exotic options include bizarre-looking varieties, but they only broaden the possibilities of the dinner menu and the health benefits that come with them. 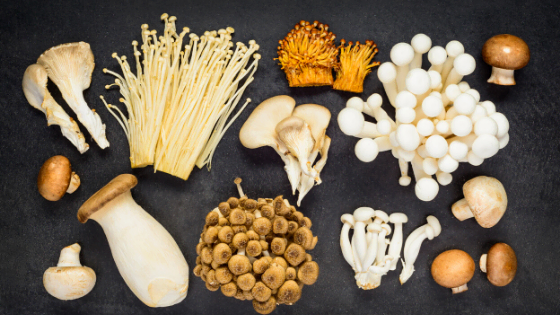 Lightly grilling seems to be the most healthful and flavorful way to preserve the precious nutrients found in these miraculous champignons. Adding a splash of olive oil and some seasonings equal a quick and healthy side to any meal.

Activate an extra boost of vitamin D with a sunbath for an hour or two before preparing. Flip them upside down to be most effective.

Want To Get Creative With Cooking Mushrooms? Here's Some Recipes To Start With!

Suppose you want the medicinal aspects, but the flavor or texture is unpalatable. In that case, supplements are available and can have synergistic effects when multiple species are combined.

Just be sure to find a manufacturer that offers 100% organic vegan extracts or supplements handled under strict guidelines that preserve their nutrient content and overall effectiveness.

For sure, mushrooms are supportive in creating an internal environment where physical and mental activity can continue to thrive. When it comes to exercise and endurance, mushrooms are a great companion to add to the whole foods plant-based diet. How do you incorporate Vitamin D into your plant-based diet? If you have any delicious recipes you'd like to share with the Assuaged community, check out our ➡️Share A Recipe⬅️ page!

Hi there, currently I am attending Quantum University for Natural Medicine and Holistic Health. Growing up with some family members in the medical field while having others with issues that ranged from chronic illnesses to cancer to mental disease provided many dots to connect. Observing the connections and processes over the years has been a continuous drive for my passion of alternative healing. I have a deep-rooted interest in what I refer to as the three P's; Psychology, Philosophy, and Physics, and the revisions made by the field of quantum mechanics. I currently reside in Wyoming, to study and focus on the connection between how nature, simplistic lifestyle, and a healthy diet all contribute to optimal wellness. Mindfulness is key to a healthier self, inside and out, and each day is a new opportunity to embrace our best self and offer that to the world. 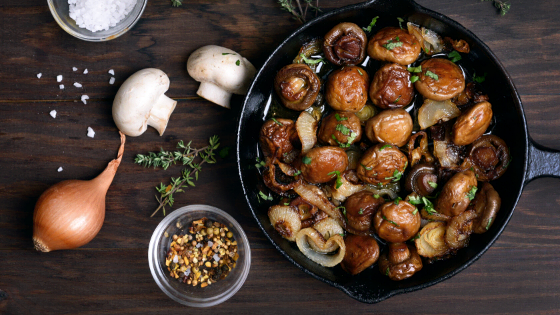 Do Vegans Eat Mushrooms? A Sustainable Alternative To Meat
Mushrooms are quite mysterious, from how they grow to what food group they are in. Their odd qualities raise questions for vegans as a meat alternative.