Katie was diagnosed with megalencephaly at birth, a growth development disorder characterized by the overgrowth of the brain.

However, this diagnosis does not explain the other symptoms that Katie experiences and doctors have said her mystery condition is so rare, they are unable to identify it.

Angie Renfroe, Katie’s mother, has been awaiting a full diagnosis of her daughter ever since her birth and doctors have started to discuss the possibility of naming the unknown condition after Katie.

Angie, who resides in Florida with her family, said: “Katie is very rare – she has not been diagnosed with anything and they’re still trying to find out what she has.

“We found out when I was about six months pregnant with her that she was going to have megalencephaly.

“But I do not know why her face is the way it is – I do know that when she has surgeries the only thing they move from her face is like fatty tissue.

“And if they can’t figure out what she has, they’ll just name it after Katie."

Katie suffers with side effects including seizures where she is unable to walk and talk and she also has to be fed through a feeding tube.

When Katie was first born, the family traveled to Hollywood, Florida to visit doctor Roman Yusupov – a specialist in pediatric genetics and pediatric cleft and craniofacial disorders.

But unfortunately, he was unable to diagnose Katie and has continued to monitor her progress since then.

He said: “I have never seen anything like it, she is truly unique and perhaps one in a million.

“Her diagnosis is very interesting. I think she has what is known as an overgrowth syndrome in which different body parts start to increase in size.”

Due to Katie’s enigmatic condition, she has endured numerous surgeries throughout her life including brain surgery at just nine months old.

Angie said: “Since birth, Katie has had her brain surgery, her tonsils removed, her feeding tube, they downsized her ear, her tongue, her cheeks have been downsized several times and she’s had two cysts removed off of her head.

“So yeah, she’s had quite a few surgeries. A lot more than anyone should have had."

Katie attends a school for children with disabilities – but she is able to work on the computers and of course, get involved in circle time with the help of her favorite teache

And she is never short of care at home, coming from a large family with seven biological brothers and sisters plus step-siblings.

Katie’s sister, Megan Renfroe, 18, said: “I think the best thing about Katie is her personality – she’s very outgoing and wild. She has an amazing laugh!”

Angie added: “Katie is happy. She loves to do almost anything that any other kid can possibly do.

“She just loves life. She also has a little devious side to her where she likes to try and booby trap the house to see if she can make us fall. And she finds it very hilarious.

“She has emotions – if something hurts her, she’ll cry about it. If something is funny to her, she’s going to laugh about it.”

As Katie’s condition remains undiagnosed, her future prognosis is unknown.

“She just makes the most of what she has and I don’t really think that she knows a difference, she wakes up and that’s who she is,” Angie said.

“We can have the darkest days in the world, but she’ll just laugh or smile and it gives us so much. She just makes us happy.” 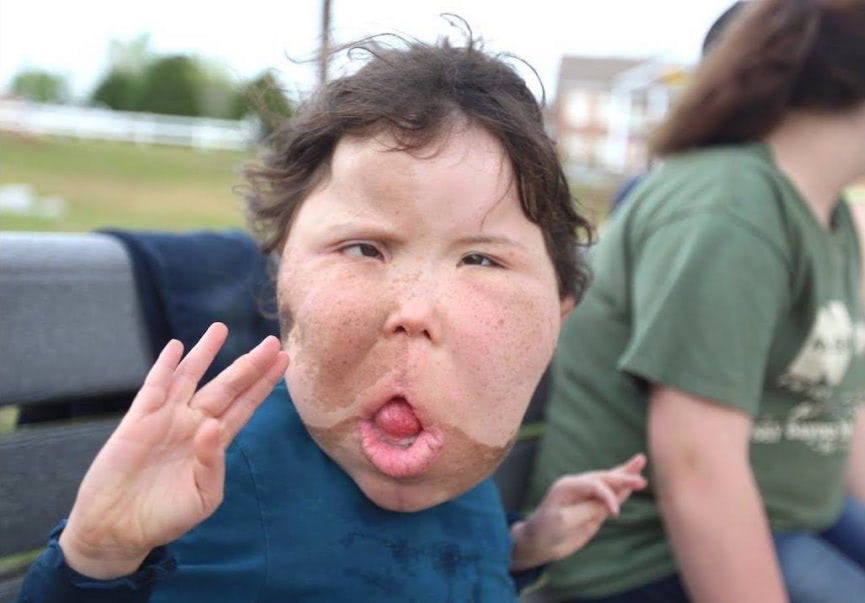 Nine-Year-Old Katie Born with a Rare Disorder: Megalencephaly
This is a story of a young girl who was born with a rare disease and her amazing journey with her wonderful family that loves and supports rain or shine.