Raising Awareness for Facial Differences One Smile at a Time

Her smile is broad and confident despite her differences; Rebecca Brown, now nearing the end of her medical journey, learned at an early age not to let the bullies get her down.

“One of the girls I graduated with made fun of me for my facial difference,” she said of one such instance. “I walked away from her. I just don’t pay attention to it.”

Brown, 18, was born with hemifacial microsomia, a craniofacial condition which results in the tissues of one side of her face being underdeveloped. It is one of dozens of afflictions that fall under the umbrella of a facial difference.

Brown’s mother, Teresa, said that her daughter has never let her condition get in the way. “Rebecca was never one to hide her face. We always told her she was beautiful since she was a little girl. She grew up with a lot of self-esteem about herself,” she said.

And now Brown is adding her voice to AboutFace, an organization looking to increase awareness about facial differences in Atlantic Canada. “I would like people to realize it’s OK to have a facial difference,” said Brown, the recipient of AboutFace’s national scholarship program. “I want people to feel good about themselves. They shouldn’t be afraid of being bullied.”

AboutFace, which is based in Ontario, is in the midst of a campaign to increase its impact across the country.

Danielle Griffin, the organization’s executive director, explained there is a stigma around facial differences despite nearly two million Canadians having some form of visible difference. “By having these conversations, there can be more awareness, more acceptance and more inclusivity,” said Griffin.

Facial differences can be congenital or they can be acquired either through an accident or an illness like cancer. Often, people assume that a facial difference includes a cognitive delay or a learning disability. Griffin notes that this assumption is simply not true. “Overcoming barriers like that is a significant part of our work,” she said.

AboutFace currently offers a camp for kids, support groups, a national scholarship — which Brown won — and information sessions about facial differences. Griffin said she hopes to expand the organization’s work in Nova Scotia, which would include scheduling social and networking opportunities for people with facial differences in Halifax.

Dr. Michael Bezuhly is AboutFace’s Halifax-based board director and a pediatric cranial facial surgeon at the IWK. Bezuhly, who helps run the summer camp, said it’s important to create a safe space for kids. “In a world where we have concerns about cyberbullying and bullying at school, it’s an invaluable resource,” he said.

Named Camp Trailblazers, the camp brings kids from around Atlantic Canada to Brigadoon Village in the Annapolis Valley. Working at the camp offers Bezuhly another window into the lives of the patients he treats. “You get to see them as the regular kids they are. The only difference between them and another child is the fact that they look a little different.”

Brown said that the summer camp was a haven during her youth. “I’ve been going to the camp for the last seven years. It makes me feel good about myself,” she said. Ultimately, Brown said that the support she’s been given has empowered her to live an active life, regardless if people stare; she attends classes four times a week at the community college in Truro, she works and she volunteers.

Bezuhly highlighted although it can be difficult to initially overcome, it is important for kids just to be themselves. “It’s not something you can hide. The face is something that everybody sees; it’s what you show the world. I think our society is thankfully moving towards a broader acceptance,” he said.

Brown has had a previous surgery to treat her facial difference and her last operation, which will help to build up one side of her jaw, is scheduled for early 2018. Her father, Kirk, said, “Everybody in the community knows who Rebecca is. It doesn’t matter where you are, they ask about Rebecca. She’s obviously impacted a lot of people,” and he couldn’t be prouder.

These days, Brown said she’s happy with what she’s accomplished. She also said she hopes that other kids with facial differences can learn to accept and love themselves, no matter their differences. “I’m comfortable with who I am,” she said with a smile. “I feel beautiful.” 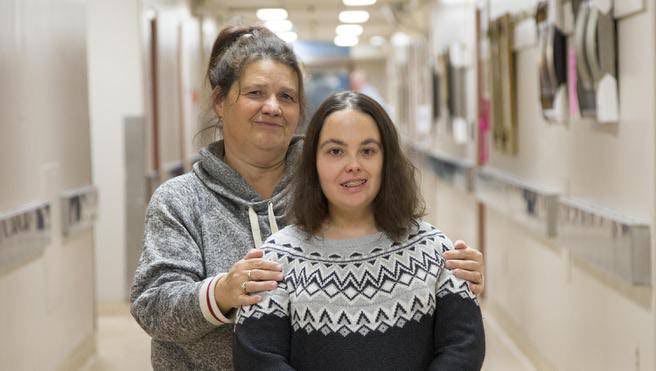 Raising Awareness for Facial Differences One Smile at a Time
Brown, the recipient of AboutFace’s national scholarship program “I want people to feel good about themselves. They shouldn’t be afraid of being bullied.”