The voluntary surcharge has provoked mixed — and heated — reactions on social media.

Frustrated with the lower salaries that women tend to receive compared with men, an Australian cafe is taking matters into its own hands — imposing an 18 percent “gender pay gap tax” on male customers to highlight the issue of wage inequality.

The move has prompted both praise and scorn from customers and folks on social media. Some have condemned the practice as hypocritical and discriminatory, while others have lauded the tax, describing it as a bold and innovative way to call out a deeply entrenched problem.

Information about the surcharge was listed on a chalkboard placed outside Handsome Her, a new vegan cafe in Melbourne. The board listed the cafe’s three “house rules”: “Rule #1: women have priority seating. Rule #2: men will be charged an 18% premium to reflect the gender pay gap (2016) which is donated to a women’s service. Rule #3 respect goes both ways.”

In 2016, the average full-time base salary for women in Australia was found to be 17.7 percent less than that for men, according to a report by the country’s Workplace Gender Equality Agency. Women were paid less in all industries, the agency concluded.

Alex O’Brien, owner of Handsome Her, explained to Broadsheet Melbourne in a recent interview that the goal of the men’s tax was to prompt a conversation about this gaping wage gap.

“I do want people to think about it, because we’ve had this [pay discrepancy] for decades and decades and we’re bringing it to the forefront of people’s minds. I like that it is making men stop and question their privilege a little bit,” she said.

O’Brien noted that the tax will be implemented one week out of every month and will be voluntary. Male customers will be given the option to pay the premium, she said, but if they refuse, the surcharge will be waived.

All proceeds from the tax will be donated to a charity dedicated to women’s causes, she said.

People on social media reacted strongly this week to the news of the surcharge. Some commenters approved of the idea:

Others, however, weren’t so convinced.

In a scathing op-ed in Australia’s Herald Sun, writer Susie O’Brien said the cafe was “clearly discriminating against men.”

“I understand their desire to do something to address the gender pay gap that means millions of Australian women earn thousands of dollars less than their male peers … [but this] is setting back the cause of gender unity, not advancing it,” she wrote. ”Surely it will just put men off by making them part of the problem rather than part of the solution.”

Despite the backlash, Handsome Her wrote on its Facebook page on Sunday that it had received a lot of support since opening two days before.

“Yesterday and today we were jam-packed with customers showing their support,” the cafe wrote, adding that some male customers had traveled “across town to visit us and pay ‘the man tax’ and throw some extra in the donation jar.”

ASSUAGED OPINION: This is discriminative and unacceptable. Men or Women, we are all humans. We must challenge these barriers and stand for equality TOGETHER. This does not represent the veganism movement. 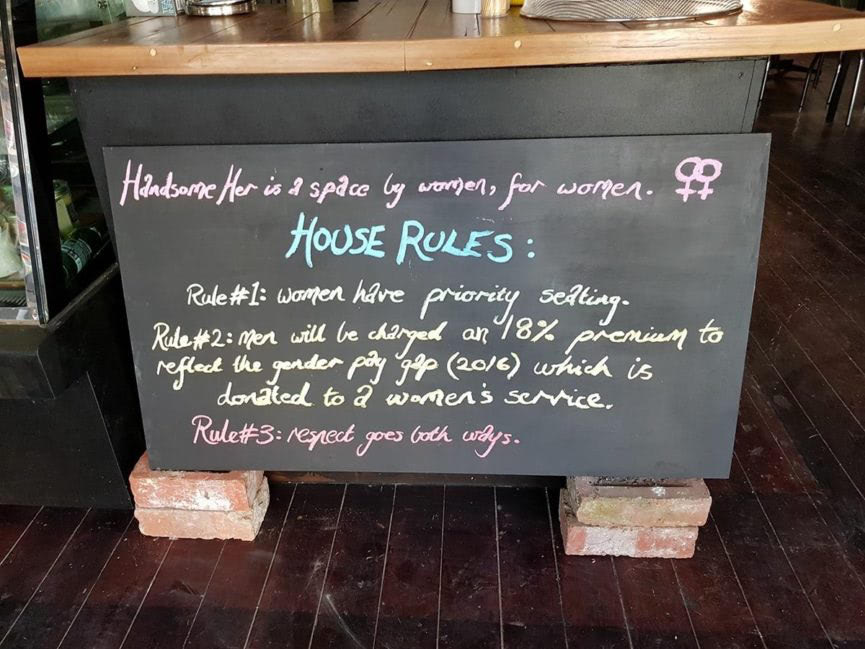 Vegan Cafe Charges Male Customers 18 Percent ‘Gender Pay Gap Tax’
Gender disparity is no secret, and it's a reality female always has to deal with. This vegan cafe decided to do something very unique about it.