Treacher Collins Syndrome Self Advocacy with a Rare Disease

I wasn’t born an advocate for Treacher Collins Syndrome (TCS), and if anyone had asked me what I wanted to be when I grew up (which few people did), it would have been the last thing to cross my mind. Like others with disabilities, I was just trying to survive and lead a normal life by pursuing my educational studies and working full time.

Later, I advocated for my friends and family because I had a law background and they didn’t. I did legal paperwork, helped get financial aid for students and wrote any number of letters to help any number of people. Yet I still didn’t consider myself an advocate, especially since a lot of what I did was an attempt to buy friendships.

Someone told me recently that she could not connect with others who had Treacher Collins. I think I might have been the same way when I was younger. I didn’t want to be in the Treacher Collins world. I wanted to be in the “normal” one. Unfortunately, the people in that world, most of them anyway, were the ones who judged. They couldn’t understand our differences; and in all honesty, we couldn’t fully relate to them either.

This year, I met two people older than I who have established careers and who are comfortable with who they are. They don’t care if other people are looking at them, and they made me question why I still do sometimes. Although our stories are different, they inspired me. About the same time I met them, I started posting articles and videos on social media. Immediately I heard from hundreds of people saying that I am an inspiration to them. Now, I get it. Advocacy is about awareness. It’s the bigger picture. It’s about relating to others in more ways than one.

There weren’t any books on craniofacial differences when I was growing up. I had no advocates. Thus, I was essentially alone in a sad, depressing world. I wanted to be part of so many things, and I couldn’t. Getting picked last for baseball or group projects in art, history, or drama is a horrible feeling. It happened to me all the time, and I hated it. When I advocate for Treacher Collins, I’m doing it for everyone who has ever suffered those feelings of inadequacy and exclusion. And I’m doing it for me.

Yes, I’m afraid sometimes. And no, I can’t always separate myself from the criticism I receive. When you’ve experienced ridicule, the last thing you want to do is speak out publicly and leave yourself vulnerable to criticism. Still, I feel I have a voice that stems from my experience, and I am committed to making it heard. 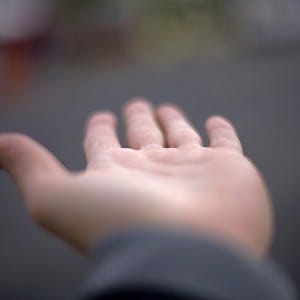